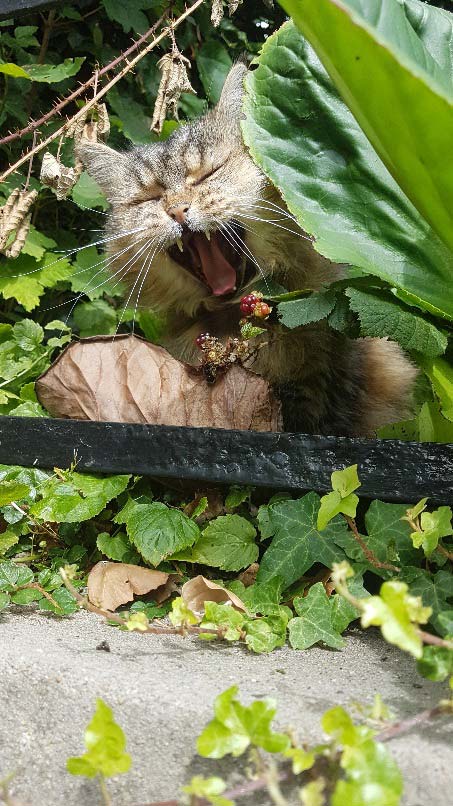 Dolly is definitely a cat with attitude. My neighbours are either asking after her or reporting back with stories of her. From defiantly obstructing the communal garden steps to man or dog, to leaving mice on people door steps, or even sightings of her strutting her stuff, fluffy tail raised over her back, walking behind a fox. Dolly is her own ‘person’. She’ll follow me like a dog outside yet stare me out indoors until I stop what i’m doing to give her attention.

She has been my Artists mews for 8yrs, my best selling art card and paintings are of her. Dolly even has her own facebook following since March with ‘The Daily Dolly Post’ with her wry quips and photos of life indoors and out during the pandemic.

Her talkative chirups only briefly halted in August when she had 2 operations, one to remove a tooth and the other a large lump on her lip. Surprisingly she lost her mew for a week, and I actually missed her dominant ways.
Still, her recovery was swift but she maybe softening, as a persistent young ginger tom, called one-eyed Danny has stopped her hissing by greeting her on the nose. Now they always touch noses on meeting. I even have the photos as proof!

Jeremy was particularly kind with both Dolly’s operations. Particularly with constant updates by phone on her recovery and prognosis. I heard that she was very aloof through her various day visits, so I can only apologies. And despite Jeremy’s predictions that she would come home ‘sleepy’ Dolly managed to see-off a rogue cat before posing for the attached photo.

We use cookies on our website to give you the most relevant experience by remembering your preferences and repeat visits. By clicking “Accept”, you consent to the use of ALL the cookies.
Cookie settingsACCEPT
Manage consent